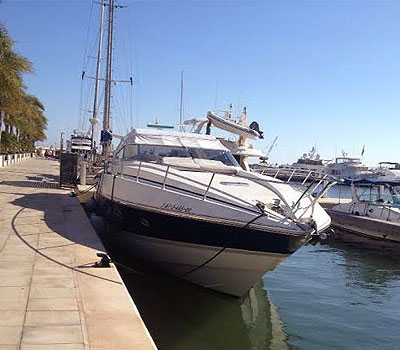 We can understand Collision as the crash between several boats, ships or naval assets in which whether a person, asset or a boat is damaged. The law is not applied for Government or Official Navy Boats.
Collision is regulated as well by the International Convention for Unified collision Rules signed and published in Brussels on the 23rd September 1910 and the rest of Conventions or International Laws which Spain took part of in this matter.

Civil liability is set for the case of proved guilt, the different kind of faults are graduated and force majeure is excluded of this liability.

In order to protect the third parties involved in a accident, the law states a joint liability between the two shipowners.

A general average occurs when reasonably and intentionally a damage or extraodinary expense for the common rescue of the committed and contracted assets on a sea trip in case of any danger.

The shipowner can retain, on board or at harbour, the carried goods if the interested parties don’t grant enough warranty to comply with their contribution duty. Likewise, they will also have to sign a compensation for damage agreement, in which corresponding goods and its valuation should be in detail.

If the interested on a boat trip does not reach an agreement for the compensation on the general average, any of them could attend a Notary Public office and request and apply for a file of compensation rule don sections 506 to 511 of the Law.

Rescue operations are any act towards assist and save a boat, ship or vessel, in order to recover whatever other goods inside the boat when considered in danger, only when on navigable waters, with the exception of the continental waters which are not communicated with sea waters and are not used by maritime navigation ships.

Rescue operations will be regulated under the International Rescue Convention issued in London on the 28th April 1989. Successful operations of rescue will entitle the rescuers in order to be awarded a prize or gift as compensation. This prize could never be over the value of the ship or rescued goods and is normally paid by the shipowner. If the prize or agreed amount has not been guaranteed the rescuer can keep and retain the ship until then.

Sunk assets or vessels is regulated in sections 369 to 383 of the Law. Unless there is an express statement by the shipowner, sunk assets or vessels will not be considered as abandoned. If the assets are considered abandoned and providing that three years go by since sinking, the Spanish Government can acquire and become the new owner by Prescription, unless the owners expressly request the ship removal and extraction from deep water, in which case the term of three years will be interrupted counting again from zero.

Civil liability is ruled in sections 384 to 391. When damages and pollution occurs the principle “Who contamines would pay” is applied. There is also an obligation to sign a civil liability insurance policy in these cases to cover damages to other people, vessels and the pollution too.